Submission to Inner West Council in March 2018 ,after the plan was sent back for revision.

See the plan and info on the public meeting on May29 on Yoursayinnerwest.com.au 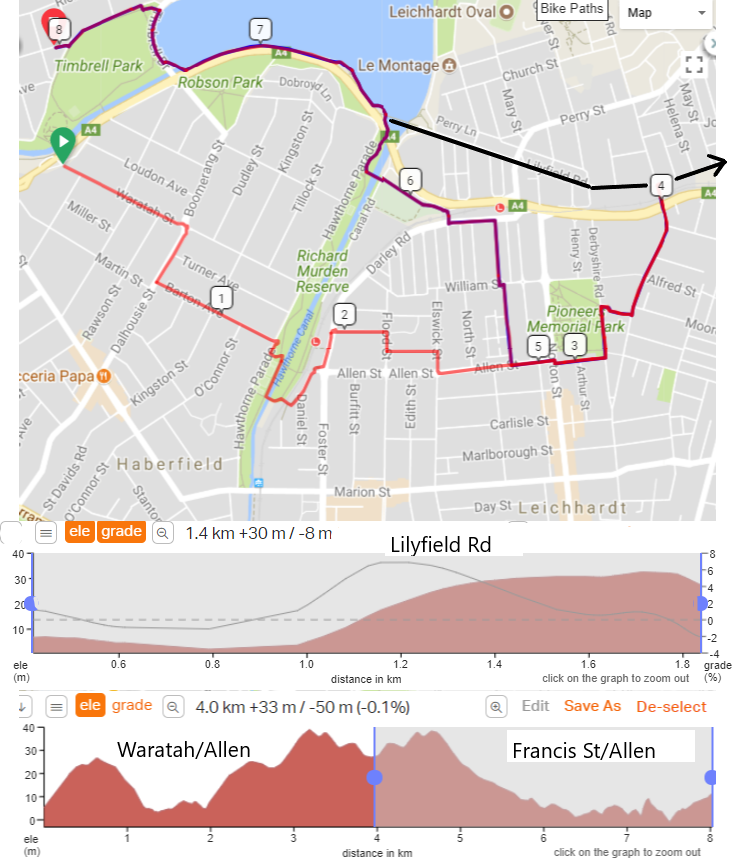 Improving key cycle facilities in a densely built environment is not as simple as it seems!

Take the case of the proposed two-way cycleway proposed for Lilyfield Rd. It is clear that AshBug, Bike Leichhardt and Bike Marrickville are all aiming to make things better for all cyclists in their former municipalities and all groups would support more state government money being put into making it easier for people to cycle to the city from the Inner west. Currently the improved Lilyfield Road cycle lanes work relatively well for the hardened commuter cyclists that use this route. These cyclists often come from areas beyond our new Inner West municipality and are happy to deal with the steep hill up from the Hawthorne Canal and brave vehicles entering Lilyfield Road from many cross streets at peak hours.

Ostensibly, the uphill/downhill lane re-alignments and green intersection treatments done by Leichhardt Council have been useful at providing for fast moving cycle commuters, largely male and fit. However the orientation of the Transport for NSW policy in Sydney’s Cycling Future (2013) is to substantially lift the numbers of people cycling from the currently low base of around 2% modal share to double this by June 2017. In other words they want to get people new to cycling onto their bikes, and, as the Lilyfield Rd cycle facility in a major part of the Inner West 5Km strategic links to the CBD it is fundamental to their aims of improving modal share for cycling in Sydney.

My personal reaction to this project was ‘what a waste of money, to muck up a perfectly good cycleway and replace it with a cramped, slow moving and potentially dangerous facility’! I would much prefer that if the state government wants more novice cyclists to take up cycling they should put a dedicated facility all the way through the light rail corridor using the old Rozelle Rails yards and incorporate the link to Anzac Bridge, utilizing more gentle grades and separation from busy cross streets and the difficult crossing of Victoria Rd at Rozelle.

I was looking at it from my perspective alone. However if our groups are true to our aims of improving cycling for all we need to consider ways of actually getting more people to cope with cycling in our congested, car dominated hilly Sydney.

There are many issues to be considered with this project such as dealing with residents’ parking issues, maintaining a reasonable quality of route for higher speed commuter cyclists and improving the cramped crossing of Victoria Rd. Getting access to the rail yards for a better quality off-road route also poses access issues across Lilyfield Rd and gradient issues for access ramps. The dream of using the Rozelle rail yards for an extension of the Greenway may be forced into the longer term due costs, State Rail intransigence and Westconnex route uncertainty concerning the Rozelle interchange.

These are some of the complex issues that show that although the state government is slowly moving on recognizing what we already know about the benefit of usable bicycle facilities, the path to success is difficult.

The actual design of the cycleway has been modified since the community engagement held in June 2016. This will be available for viewing  at a Drop In Session held at Leichhardt Town Hall on Tuesday 29 November between 6:30pm to 8:30pm.

As part of our democratic process I welcome all views on this project and I urge Inner West Bicycle Coalition members to attend the session if they wish.

Welcome to WordPress. This is your first post. Edit or delete it, then start writing!